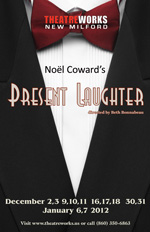 This classic audacious comedy by the legendary Noel Coward centers on Garry Essendine, a popular, pampered actor - modeled after Coward himself - busily making preparations for an extended overseas tour with his devoted secretary Monica. His plans are complicated first by Daphne, a beautiful stage-struck ingenue, as well as an absurdly eager and aspiring playwright, Roland Maule, who insist on his attentions. When his wife, his agents, and his numerous admirers arrive, Garry is hard pressed to escape what quickly spirals into a hilarious farcical game of cat-and-mouse. Typical of Coward's sparkling dialogue and dazzling wit, Present Laughter was a smashing success in both New York and London with Broadway revivals starring George C. Scott, Frank Langella, and Victor Garber in 2010. "Sharp, withering, and funny." - The New York Times

Classic Coward Play is at TheatreWorks

A Gift Of "Laughter" In New Milford