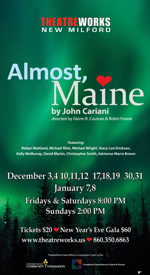 Set in the mythical town of Almost, Maine, this delightful romantic comedy creatively delves into the vast mysteries of the human heart with laughter, heartbreak, and hope. On a cold, moonless night in the middle of winter, all is not quite what it seems as the northern lights hover in the star-filled sky above Almost. Residents find themselves falling in and out of love in unexpected and often hilarious ways. Knees are bruised. Hearts are broken. Love is lost, found, and confounded. But the bruises heal and the hearts mend - almost - in this enchanting midwinter night's dream. "...a whimsical approach to the joys and perils of romance. Magical happenings bloom beneath the snowdrifts." - The New York Times

Ever Been in Love? Almost, Maine is the Play for You!